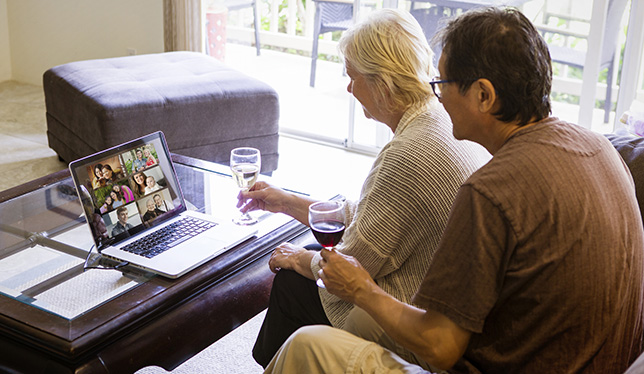 The online hub forced alumni relations teams to get creative – and resulted in more attendance at events than expected.

The global pandemic has forced relationships with alumni and engagement teams to postpone and cancel events, and challenged them to figure out how to produce events online. But the past year has also had an unexpected setback for these teams: by going virtual, they have been able to increase the scope of their influence.

Before the pandemic hit, Karen McQuigge spent much of her work in a plane or on the road. As Director of Alumni Advancement at McMaster University, she traveled regularly to support international recruiting and to Canada to visit and host events with alumni, sometimes with the president of the university. â€œGoing virtual has certainly widened the participation of the university alumni program, because it is their home [and alumni] can choose what they want to do, â€says McQuigge. She has noticed that going virtual over the past year has made it possible for older alumni, especially graduates over 80, to attend evening events. â€œThey would never be out late,â€ she explains. â€œThey wouldn’t driveâ€¦[or] go out to an event at night. But they participate from home.

In February, Ms. McQuigge hosted an online event with Lawrence Martin, McMaster graduate and Globe and Mail columnist. â€œI had a team member in another part of Hamilton, someone in Mississauga and someone in Burlingtonâ€¦ we were all [working] home, offering a program to nearly 500 alumni around the world, â€she says. â€œIf we had to organize the same eventâ€¦ in Ottawa, where [Mr. Martin] livesâ€¦ we would not have taken 500 people out to a physical location on a cold February night.

Shanna Hopkins, director of alumni affairs at St. Francis Xavier University, had a similar experience after pivoting her work online. â€œThe virtual world has many advantages, as some people cannot attend the events that we usually organize. Whether it is family constraints or places, dates, times, there are many [reasons]. But we are finding that we are getting more participation.

Initially, Ms Hopkins was concerned that alumni might not attend virtual events, especially older cohorts. Last year, the university hosted a virtual re-entry for the 1970 class, and Ms Hopkins said alumni were reluctant to participate. â€œWe didn’t know how it would work out with the technology. â€¦ They said, ‘You know, we’re not 15, 16 years old. We’re 70-year-olds trying to navigate Zoom, â€she explains. But the event went well, she adds, and gave her and her colleagues in alumni affairs confidence that they could implement other online initiatives as well. .

One of these initiatives is X-Connect, a podcast series featuring college students interviewing alumni – which Ms Hopkins says engaged both graduates and current students, before they became alumni. Ahead of the podcast’s launch, the students involved worked with retired local CTV News presenter Nancy Regan to learn how to conduct interviews and prepare for the series. And later, at an online alumni event where Ms. Regan interviewed St. FX President Andrew Hakin, the former reporter introduced the students of X-Connects and asked them about the series. future. â€œAbout 400 alumni signed up for this Zoom meeting, and the minute it ended my inbox was flooded. [with attendees saying], ‘It was amazing. Thank you very much, â€says Hopkins. â€œIt was a Thursday night in August at 8 pm, 30 degrees outsideâ€ and hundreds of people were still present.

Jenna McCann, Director of Business Development for UBC Alumni, works with her small team to generate income for the UBC Alumni Association and promote benefits and benefits for members . She wasn’t in the event planning business, but when working from home she became interested in how she could support virtual content development to engage alumni – and ended up plan and support online initiatives that have won UBC Alumni Awards. And it all started with a pastry challenge.

â€œIt was back when we all made bread at home. And so I was like, â€œHey, let’s get down to some of the UBC recipes,â€ Ms. McCann said. â€œUBC is actually very well known to our alumni for our bakery. We have some amazing baked goods, so you’re guaranteed to gain at least 10-15 pounds in your freshman year, whether you’re a staff member or a student. Using classic recipes campus – and her Android phone conduit taped to a borrowed tripod – Ms McCann launched the challenge by make cinnamon rolls. The initiative, which lasted for 10 weeks, was a light and fun way to involve the elders at home, she says.

Ms. McCann has also played an important role in the success of UBC alumni. Summer series, who won a regional gold medal Advice for the advancement and support of education award in a new pivotal category online. “We realized very early on … that there was a need [for virtual content], especially for families who were spending a long summer with children at home and trying to balance work and care, â€she says. â€œI knew UBC and UBC alumni had the resources to deliver engaging activities and content. We just had to share the wealth with our alumni in the community, so I got to work organizing a four week schedule, highlighting recreation programs, educational opportunities, health and wellness activities. . A lot of activities and programs had already been planned or created, they just had not been brought together in one place. “So that’s what we did [with the UBC Summer Series landing page]”, adds Ms. McCann,” because we wanted to bring some joy back to summer. “

Of all the perks of engaging alumni online, a virtual event can’t really replace the experience of seeing old classmates again, in person. â€œThere are some things that don’t necessarily translate into virtualâ€¦ the one that I think struggles with is a reunion,â€ says Ms. McQuigge of McMaster. “We delivered [a reunion online in the spring] but it just doesn’t have the same kind of feeling you would have brought back on the 15the birthday class at campus. Ms. Hopkins of St. FX agrees. She says her team will likely take a hybrid approach to post-COVID events, with some events online and others in person.

It’s an approach that UBC alumni and UBC alumni in general discuss, says McCann. â€œI think it’s been a great exercise to see what we’re capable of, in a distant world,â€ she adds. â€œIn the past, we believed that it might not be possible for an entire workforce to be sent home to work and to continue to be collaborative and creative, and involve our alumni at the levels that we were able to engage. them. I hope that we can build on these lessons and put them forward in planning for the years to come.

Warning on the job offers of the “online study platform”