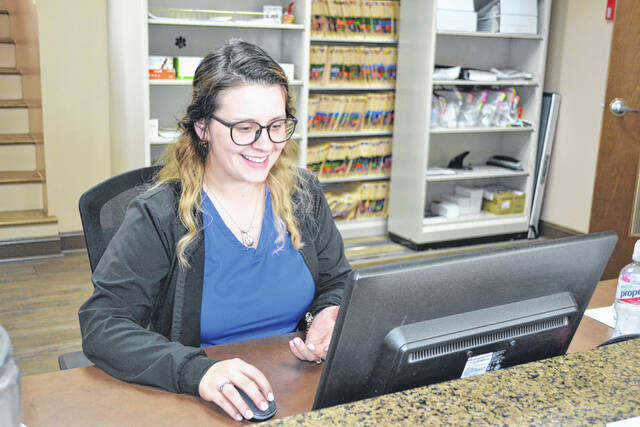 LUMBERTON — Online learning continues to be a popular option for students like Madison Williams, 23, a student at Robeson Community College who is working toward an associate of arts degree.

“It gives me the opportunity to go to work, to spend time with my child, once he’s in bed I can take my classes online,” said Madison Williams, a college transfer student at RCC. “Even when I’m done with my classes, I still have about 30 minutes to hang out and relax.”

Online classes have been Madison’s gateway to earning a degree.

She has a busy life – she’s a wife and mother, she works full time and now she’s going to college. Online courses give her the flexibility she needs to achieve her goals while maintaining a good work/life balance.

Madison says that while enrolled at RCC, she never set foot on campus, even though it is located less than a mile from where she works.

“I took a brief walk when I was in high school,” Madison said. “Other than that, that’s it… All communication I’ve had with the RCC has been by phone or email.”

Williams chose the RCC because of its proximity to his home.

“I also know a lot of people who went to RCC and they are doing very well at the moment,” she added.

She says the faculty and staff have also made a big difference.

Madison remembers a time when she felt like giving up. At that time, she was struggling and saw no reason to continue attending.

“I was taking a math class with Vanessa Chavis,” Madison said. “She called me and said, ‘I don’t want you to leave school, at least finish this semester.'”

“If it hadn’t been for that phone call, I would have dropped out and been done with school,” Madison said. “It showed that she cared about what I was doing.”

Madison completed the math course and finished the semester strong, and now continues to move toward her degree with hopes of finishing by August 2023.

Through it all, Madison sometimes says she forgets she’s an online student.

“The experience so far has been great…my counselors respond to emails on time and the teachers are great,” she said.

Madison says the free lessons she received have also been a blessing.

“I have a decent job, but with a mortgage, two car payments and a kid, free tuition meant it was one less thing to worry about,” Madison said.

She also took advantage of a free winter course offered last December by the RCC by enrolling in Art Appreciation.

“It was fun, I had Scotty Thompson in high school, so I felt like I was back in his class,” she said.

Looking to the future, Madison says she often stays up at night trying to figure out which school she’s going to next, saying it’s a “great necessity” to make this decision.

She would like to continue taking online courses. She always thought she would get a bachelor’s degree in education, but over time she’s not quite sure if that’s still the direction she wants to go.

“I wanted to be a teacher, but I fell in love with it,” said Madison, who works at the North End Veterinarian Clinic in Lumberton. “Now I’m not sure what I want to do.”

His favorite part of his job at North End was working in the kennel.

“That’s where you develop those relationships,” Madison said. “I can literally play with dogs all day.”

One of his favorite dogs is called Happy.

“His name matches his personality,” Madison said. “For being an 11 year old dog, he acts like he’s 5 or 6 years old…he’s such a happy boy. I only saw him once not being happy, when he was sick and not feeling well.

Madison started at the veterinary clinic shortly after her maternity leave.

“My aunt invited me over to do an interview and I’ve been here ever since,” she said.

“I told my office manager I was coming for his job,” Madison said with a laugh. “I would like to do what she does, when she retires.”

The office manager happens to be his aunt.

“I know I’m doing this for the animals,” Madison said. “I have always loved animals.”

But she says her time at Robeson Community College taught her a valuable lesson.

“What I learned, in my classes, some students are older, some are younger, and it showed me that you don’t have to understand everything exactly now,” Madison said.

Madison said she’s going to take it one day at a time as she seeks to figure out the next step she should take on her college journey.

Robeson Community College currently has over 80 online courses available for the fall semester. If you would like to register, contact the Admissions Department at [email protected] or at 910-272-3342.

Like Madison, you don’t even have to set foot on campus to enroll.

And, says Madison, if you need a good vet, “come and visit, we’re just down the road from the school.”

Cheryl Hemric is Public Information Officer at Robeson Community College. Hemric can be reached by phone at 910-272-3241 or [email protected]