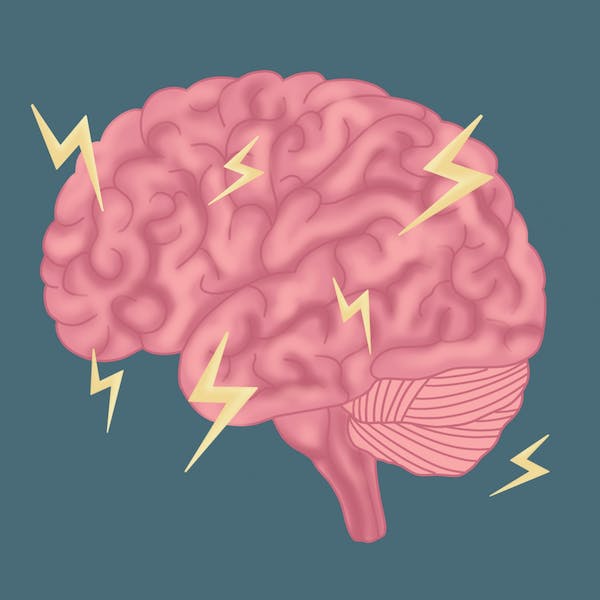 I think it’s safe to say that for many of us our college experience has been anything but â€œnormalâ€ for over a year now due to the pandemic. For about two weeks now, my days have been even more abnormal, not from the pandemic, but from a concussion. Here’s a look at how it went …

What seemed like an innocent trip to the bathroom ended up causing me a head trauma. To give a bit of context, I was in my bathroom one morning and trying to do my hair. In an attempt to comb my hair, I leaned under my sink to grab a hair tie from the basket there with other toiletries. In a hurry to get up, I managed to bang my head against a metal shelf that sits next to my sink.

At first I didn’t feel anything – the place where I hit my head was a bit sore, but I had no headaches or normal concussion symptoms such as fainting or feeling dizzy . I was relieved to be fine, but still felt a little paranoid about my history of concussions. Prior to this incident, I suffered three concussions, one of which was severe, and I have persistent symptoms to this day. You can see why I would be worried, can’t you?

Unfortunately, I was only asymptomatic for about a day. The symptoms came on slowly but steadily – they started off with nausea and a lack of appetite at first and then developed into more severe symptoms like tinnitus and disorientation. I still don’t remember what day of the week I hit my head, but it was a Friday afternoon that I felt the worst. After discussing it with my roommate and my mom, I decided to go have my head examined. Even going to see a doctor, I thought I was exaggerating the situation or hyperbolizing the symptoms I was experiencing. However, I decided to follow my instincts – I just knew something was wrong.

If it wasn’t obvious yet, my instincts were right. I had a concussion, but it was only minor. That said, I was sent home with a set of instructions that I have become far too familiar with: drink plenty of water, only take Tylenol for my headache, and avoid my screens.

At first, I felt like I was finally going to be able to rest during this rather chaotic and stressful semester. However, these thoughts were short lived as I quickly remembered all the work I had to do. That weekend my to-do list was especially long as I had to prepare for a pharmacology exam and write an ethics article. How was I going to do all the work I needed? To say I felt overwhelmed was an understatement.

Although I have recovered from a concussion three times before, it did not ease the frustrations I had. There really isn’t much you can do except lie in a dark room or just sleep when you have a concussion – at least that’s what I experienced. While it may seem appealing at first, it gets old quickly. It turned out to be even more the case this time around.

Since almost all academic affairs are virtual, we are constantly glued to our laptops as students. For someone who isn’t supposed to watch screens, this makes life almost impossible. I say “almost” because I actually found a few ways around this pretty big hurdle.

First, I emailed my teachers to let them know what had happened and asked them for appropriate accommodations or extensions for their respective courses. I also reached out to our TC – also known as Theresa Carroll, Senior Dean of Academic and Student Services Support at the School of Nursing – for further assistance in navigating my studies as I recover. . All the responses I received from professors or other staff at the University were more than encouraging and reassuring.

To navigate online courses, I went from taking notes on my iPad to printing out notes and writing them by hand. I would do this in an asynchronous or even synchronous class with my laptop screen facing me and my headphones plugged in. To my surprise, I found that this technique was not only helpful for my concussion, but also for being mindful during class. With sounds being my main and only guide during the lesson, I focused only on what I was hearing rather than being distracted by my surroundings or opening other tabs on my laptop.

Socially, things were a little more difficult. I wasn’t able to text or FaceTime to my friends as I usually do throughout the day, which turned out to be tricky and somewhat detrimental to my sanity. To compensate, I started sending audio messages where I could easily listen to what my friends were saying and respond in a way that wouldn’t hinder my recovery. I also went a bit old fashioned and called people instead of just using FaceTime. It was a good alternative, but I definitely missed the face-to-face aspect of video calling. In addition to the virtual options, I chose to do low-key things with a few of my close friends, like a social-distancing dinner out or a short drive to buy a low-caffeine Starbucks.

Most importantly, I have learned to be even more patient with myself. It’s easy to get caught up in a state of mind where you’re constantly doing things even when your battery is low. Due to my concussion, I had no choice but to slow down and give myself the breaks I needed – if I didn’t I would be in pain even longer and risk exacerbating my symptoms. . That said, I was patient with myself if I needed more breaks to complete an assignment or needed to take a nap more than once a day. I stopped beating myself up for not doing as much as I wanted for a day and instead celebrated all that I had accomplished. By being patient with myself and my mind, I was also able to reassure myself that things were going to be okay, that I was going to be okay.

With the limited options that were given to me, I think I really got the most out of it thanks to the changes I made. As much as I thought I was going to struggle given the circumstances, I actually adapted quite well to the situation. I am also more than grateful to have been supported by so many amazing people who have helped make my recovery so much easier.

Although I am not yet completely free from concussions, I am definitely working on it. Concussions are a difficult injury to overcome, and if my fourth taught me one thing, it is to be even more careful! So, any advice? Try not to get concussed! But if you do, be patient with yourself, your mind, and those around you. Alright, I think that’s enough screen time for me nowâ€¦

Zoya Zahid is a lifetime columnist for The Cavalier Daily. She can be reached at [email protected]